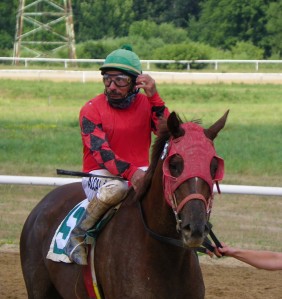 Opening day at Mount Pleasant Meadows was the climax of a roller coaster year for the central Michigan track. Porsche Pink is led to the winner's circle with Nate Alcala aboard.

A lot can happen in a year.

The central Michigan racetrack’s July 24 opening day was last stop of a roller coaster offseason that included the shuttering of Pinnacle Race Course and months of “Will they? Won’t they?” tension as the state, the track and the horsemen all worked to get on the same page.

The pressure went down to the wire, as the Michigan Gaming Control Board balked on approving Mount Pleasant’s live meet until just days before it was scheduled to commence. Once the paperwork got signed, the gears got turning – and with little time to spare, they got turning fast.

Since Mount Pleasant called it a meet last year, I have been to more racetracks around the country than I can count on two hands. At no point was I more genuinely excited for a day of racing than I was for this year’s opening day.

By the time the horses came over for the first race, I could hardly contain my giddiness, and it lasted throughout the card. The tension that built up with every event that made it look like the place would never host another race had finally come uncoiled. This feeling could have also been due in no small part to mild dehydration, but it was still pretty amazing, nonetheless.

I have been watching and playing the races at Mount Pleasant for years, but for the first time since I first picked up a program, I had absolutely no idea how the races were going to shake out. Would the native horses and riders have a home-track advantage until the new ones figured out the four furlong bullring? Would class prevail regardless of the racing surface? Would horses and bloodlines that succeeded at five-furlong Great Lakes Downs recapture the magic? Would the horses bred for Pinnacle be able to adapt? As it turns out, the answer for just about all of these questions was “yes.” Every bettor on the grounds was on a level playing field, and it was an exciting time.

The best thing about opening day was, without a doubt, getting to see everyone in the same place – Thoroughbred people, Quarter Horse people, Arabian people and other fellow racing enthusiasts. Mount Pleasant is a very communal track, and that spirit was not lost on its new residents. I was glad to see this.

The crowd was robust – easily double the average attendance, if not more. I have never been good at eyeball estimating a crowd, so whenever I want to gauge the attendance at Mount Pleasant, I look out at the parking lot. On a normal day, the cars usually make two rows. On this day, they made four very long rows. It was kind of beautiful.

But enough talk, lets look at some pictures…

Cynthia Iacovacci brought over the first horse to enter the paddock of the 2011 meet, Be A Pal.

Dave Gates hands over the reins of Devil’s Beau prior to the first race.

No More Committee heads out to the track with Ricardo Barrios in the irons.

#5 Areelfast Buddy and Julie Veltman fight off a rally from #1 No More Committee and Ricardo Barrios heading down the straightaway.

The winner of the day’s first race, Areelfast Buddy and jockey Julie Veltman.

For a brief time, jockey Christian Esqueda was undefeated as a pari-mutuel rider. Esqueda won the first start of his career, with a front-running victory aboard #1 Midnight Ransom. He was greeted at the jock’s room by a cooler full of water, as is tradition when a rider notches his or her first victory.

Octavio Bernal heads back to the jock’s room after a race.

Shake It Twice is led through the post parade with Christian Esqueda aboard.

#5 Montis Grand Concept and Nate Alcala head back to unsaddle aside #2 Mr Corona To You, with Federico Mata aboard.

The first Quarter Horse winner of the meet, Mr Corona To You, ridden by Federico Mata.

Did you ever imagine a time when Freddie Mata would be the state’s leading Quarter Horse jockey? What a time we live in.

The meet drew some of Michigan’s perennial leading riders, including Ricardo Barrios, Octavio Bernal and the above Federico Mata. With their presence also brought a few things rather unfamiliar to Mount Pleasant. Jockey’s agents roamed the grounds to represent their guys. As can be seen in this picture, some riders even brought their valets. At a track where the riders normally saddle their own horses and carry their own tack, it was one of many new sights to be seen on opening day.

Of all the horses entered on Sunday’s card, I was most excited to see Easy Ernie. As some readers may recall, this Equality gelding was my “steal of the sale” from the 2009 MTOBA yearling sale, and he rewarded my analysis with an impressive maiden score at Finger Lakes and a strong second place finish at Hawthorne Race Course. After some early troubles on Sunday, Easy Ernie picked up the pace in the final turn and made it up for second.

The beginning of race nine.

Western Pioneer and Nate Alcala shoot to the front. The pair would hold on to the lead all the way around the track and win by a wide margin.

The connections of Denis Cluley’s stable saddle Porsche Pink prior to her maiden-breaking victory, in what many called the most exciting race of the day. After starting well out of it and remaining that way throughout most of the race, jockey Nate Alcala took the daughter of The Deputy (IRE) at least five or six paths wide in the final turn. Even coming down the stretch, Porsche Pink looked to be, at best, a contender for minor purses, but she managed to get the best of a three-way photo at the wire.

On a related note, I have never seen horses close with a rate of success at Mount Pleasant like I did on Sunday. In past meets, the horse that held the advantage heading into the final turn often unsaddled in the winner’s circle. To my recollection, only the mighty Waterbury has made his bones coming from behind at MPM in recent years. The majority of Sunday’s winners still came from the front, but the new dynamic made for many more exciting finishes and threw a wrench into the strategy of handicappers.

Trainer Bob Gorham and jockey Federico Mata in the paddock.

Jockey Robert Cummings came up from Fairmount Park in southern Illinois and won a pair of races.

#4 Wagon Load and Octavio Bernal (inside) battle #7 Cashier Ready and Robert Cummings coming down the stretch. Those two, along with Suave Gentleman, pictured far left, dueled to a three-way photo, with Wagon Load coming out on top. The top three positions were each decided by a nose.

In case the pictures just don’t do it for you, I shot a video of day’s fourth race from the paddock to the winner’s circle. Hope you enjoy it.

And that was opening day. Attendance was high, the races were competitive and nobody got killed. Considering that the meet was in jeopardy just days before it kicked off, one couldn’t have asked for more.