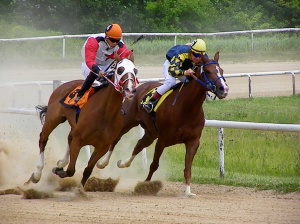 Live racing at Mount Pleasant Meadows will be on a two-week hiatus for the Isabella County Fair. Dream Quests Rose and Julie Veltman (inside) battle King of the Park and Oscar Delgado for the lead heading into the stretch.

– Mount Pleasant Meadows will not host live racing for the next two weekends because the Isabella County Fair will be using the facilities for its activities. During the fair, the track’s surface and grandstand will host tractor pulls and two nights of demolition derby. Though the notion of large metal objects smashing against one another may sound like a track groundskeeper’s worst nightmare, I do not recall an instance where it has affected the racing afterward. Live cards will pick back up on Aug. 23.

For a schedule of the 2009 Isabella County Fair, click here.

Dye and Erskine were let go June 1, while the others have seen significant reductions in their hours. At the time the story was published, ORC representatives said they had not seen the lawsuit.

Clark was a steward at DRC from 1978 until the track closed in 1998. He also worked at Tampa Bay Downs in Florida, Arapahoe Park in Colorado and Thistledown in Ohio. Clark most recently worked at Thistledown as a steward until his injury. Funeral arrangements are pending.

– This doesn’t really qualify as Michigan news, but I’m throwing it in anyway. The Thoroughbred Bloggers Alliance has added four new members to its fine stable of blogs. Be sure to give them a visit and leave them some nice comments. The newly added blogs are listed below…

Jack Riggs, a familiar voice to Detroit-area racegoers for most of his 50+ year announcing career, died Friday, Feb. 6 in Englewood, Florida. He was 79.

His racetrack announcing career began at Gulfstream Park at the age of 19. After taking time off to serve in the Navy during the Korean War, Riggs returned to the Hallandale Beach, Florida racetrack.

In the 1950s, Riggs played a key role in the first TV show broadcast from a Michigan racetrack. He was later part of the nightly replay shows from Hazel Park and Northville Downs.

Aside from his announcing duties, Riggs made appearances on TV and radio for many of the major networks, including ABC’s Wide World of Sports.

In 2003, Riggs retired from announcing and moved with his wife, Nancy, to Englewood.

Riggs was an honorary lifetime member of the Detroit Sports Broadcasters Association, the highest individual honor the organization awards. He was also given the Appreciation Award from the Michigan Harness Horsemen’s Association for his lifetime of service.

Thanks to Jeff Klenner for sending the information.

Turn on the bright lights 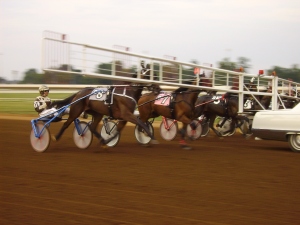 A field of trotters gets ready to go at The Red Mile.

On my second to last day in Lexington this summer, I decided to try something different and went to The Red Mile, the city’s harness track.

I have never considered myself a fan of harness racing. The whole concept of discouraging a horse from running at its fullest potential just to conform to a specific running style seems as foreign to me as race walking.

This particular evening did little to change my opinion on this version of the sport. I didn’t cash a single ticket and had a general uncertainty about what was going on most of the time.

My time at The Red Mile did, however, rekindle one aspect of the game that I found myself sorely missing – night racing under the lights.

Having spent my adolescence playing the races at Great Lakes Downs, I grew up with night racing. It made sense – run the races when people were out of work and other daytime commitments so they could blow off some steam after a hard day’s work or have a weekend night out. Plus, they made it possible for me to make the hour and a half drive from Mount Pleasant after classes for a weekday card.

Racehorses look different under the lights. They blur. The gray ones glow. It’s the same game, but there is some irresistible quality about night races that has always made me a fan.

However, I found out as I expanded  my horizons to other racetracks that night racing was far from the norm. In fact, it seemed as though the time slot was reserved for the lowest rung of the Thoroughbred food chain and…shudder…harness racing. Even night-based tracks like Mountaineer move up to the afternoon time slot for their major race days.

My night racing experiences ended with last year’s closing of GLD, which meant I had to get used to afternoon racing in the daytime.

I will admit, it has its perks. There is simply nothing that can top the proverbial “beautiful day for racing.” Plus, the weather is generally warmer in the fall months and it is much easier to take pictures when the sun is out. The early start times also mean a higher likelihood of me getting home on the same day I left.

Some have suggested that Pinnacle Race Course would benefit from a switch to evening post times where there is less competition for the wagering dollar. Because there are not currently lights on the racetrack, the main obstacle is getting them built, which would be another hit to Pinnacle’s already tight budget.

To race at night, the Michigan horsemen would also have to find a way to remove the “6:45 Rule” from the state’s Horse Racing Law of 1995.

For those of you who hate reading through legislative mumbo jumbo, the rule states that if a Thoroughbred track is in the same town as a standardbred track (Pinnacle is within a stone’s throw of two), the Thoroughbred facility can not conduct live racing after 6:45 p.m. and the sulkies can not run until after that time.

Pinnacle ran smack dab into the 6:45 rule on its opening day when gate troubles caused major delays. The races were finished slightly past that time with a lot of hustling (post parades were nonexistent after about the fifth race) and the blessing of the racing commissioner, but it was one of those instances where the obscure rule that no one remembers came into play. It appears Aqueduct recently found itself in a similar situation as well.

With all of the talk about too many tracks fighting over the same blocks of time and saturating the market, one has to wonder if more tracks will consider switching to later post times to spread things out and perhaps capitalize on a softer market.

With that, I present you with the next poll question:

When do you like your live racing:  In the afternoon sun or under the lights at night?

As with all my polls, be sure to vote for your choice in the upper-right corner of the page. Also, feel free to share your opinions and experiences with day and/or night racing in the comments.

By the way, a special thanks goes out to whoever wrote “Free lifetime pass for Joe Nevills” in the “Other” category after I broke down the previous poll. Even though Pinnacle did not charge admission last year, giving me free admission should they decide to start charging would be an immediate improvement. Whoever you are, I like the cut of your jib.