Congratulations, Michiganders. We’ve officially been made an example.

In a letter to The Baltimore Sun, a Holland, Penn. resident warns of the potential negative effects of placing a casino near Maryland’s Laurel Park by citing Michigan racing’s fall to “bush league status” (his words, not mine). He said this happened after “bad judgment and the corruption of lawmakers who heeded the promises of wealthy developers and casino lobbyists” allowed the tribal and Detroit casino interests to run roughshod over the state. The letter does not mention it directly, but altering the state constitution to cripple a competitor like said groups did in 2004 is a prime example of this idea.

If you cross your eyes for too long, they’ll stay that way. If you eat too much candy, your teeth will rot out. If you allow casinos to expand in your state without including the racetracks, you’ll become “Bush League” like Michigan.

We are being used as a threat – an example of what not to do.

So what are we going to do about it? 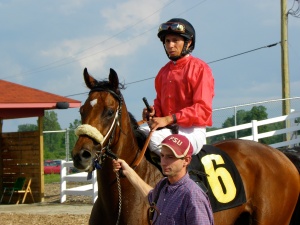 The question of what forms of alternative wagering fall under the restrictions of Proposal 04-1 continues to plague Michigan racing as it looks to expand its product. Tizzy's Prospector is led to the Pinnacle winner's circle with Alex Estrada aboard.

Though slot machines got the winner’s share of my recent poll, they are by no means the only method racetracks are trying to expand their product.

Many tracks are taking their game online with advance deposit wagering, while others are expanding on the casino concept with card rooms or instant racing machines.

Though all three (and throw slots in there, too) are completely different ways to get action, Michigan appears to be stonewalled in terms of implementing any of them by Proposal 04-1.

The brilliantly written (by tribal/casino interests) proposal requires any interest outside of the tribal and Detroit-based casinos to pass local and statewide referendums before getting the go-ahead to install video lottery terminals. Though it was sold to the public in the 2004 election as a way for them to control gambling in the state, the ballot issue instead gave the casinos free reign to expand while handcuffing their competition – the racetracks.

Because of the ballot’s less than specific wording, it could, and has, been argued that any of the aforementioned forms of alternative wagering fall under Prop 1’s umbrella. The amount of money and labor required to get such an issue on two ballots has hindered efforts to get any kind of expanded gaming off the ground in Michigan.

Obviously, this takes millions of hypothetical dollars out of the pockets of the Michigan racing industry. However, according to Michigan HBPA Executive Director Gary Tinkle, it is holding back tens of millions of actual dollars as well.

In an email exchange with Tinkle, he said over $50 million was wagered by Michigan residents through ADW services in 2008 despite their illegality in this state. While some online wagering services allow users to play Pinnacle or Hazel Park, Michiganders are not legally allowed to bet on races in their home state (or anywhere else, for that matter) unless it is at the track itself or by simulcast. Tinkle said because these wagers are not  legally recognized, Michigan’s tracks, the state, and the horsemen do not get a cut from the monies wagered as they would from a simulcast bet.

The situation is further complicated by the actual location of the wagers. Though the person placing an online wager may reside in Michigan, the hub in which the bets are actually placed is in a state where online wagering is allowed (I keep hearing about this hub in Oregon. Must do good business). This brings about the dilemma of where the bet actually originated.

Is the stay-at-home Michigan handicapper in the wrong if he plays a race out-of-state and his money never has to enter his own state limits? Apparently yes, but there are so many gray areas to Michigan’s ADW laws that the definition of what is and isn’t kosher might depend on who you ask. Either way, things would be much less complicated (and I would be more likely to actually know what I was talking about) if Michigan were just allowed to legalize ADW already.

Another alternative wagering option that has found its way into some racetracks are card rooms. With the World Series of Poker and movies like “21” bringing card games into mainstream consciousness, tracks like Canterbury Park in Minnesota are capitalizing on the popularity.

Though Proposal 1 explicitly outlaws “table games” at the racetracks, Great Lakes Downs played host to poker games for two or three years before it shut its doors in 2007. The defunct Muskegon track apparently found a loophole by hosting charity poker games with the proceeds going to some worthy cause instead of the purse pools. To my knowledge, the only money the track got out of the deal was a fee for renting the space – a far cry from the money brought in from established card rooms.

The one flaw that hurts the viability of card rooms is it’s the only alternative wagering option that can be done just as well without having to go to a casino or racetrack. Though some games are dependent on dealers, such as blackjack, the current big-ticket game, poker, is played for real money in garages, basements and game rooms around the world. One can grab a beer, go to the weekly poker night in his buddy’s basement and lose 20 bucks just as easily as he can go to the local racetrack’s card room, and he doesn’t have to worry nearly as much about his personal conduct.

An interesting option gaining steam both nationally and in Michigan is instant racing. The machines allow users to wager on stripped-down versions of previously run races on a device resembling a self-service terminal. Oaklawn Park in Arkansas was the early adopter of the new form of wagering and saw its purses and field sizes rise. An interesting piece on instant racing can be found on The Thoroughbred Brief, written by guest poster John M. Lockwood, Esq. outlines some facts and issues surrounding the games.

The challenge facing instant racing machines is state Supreme Courts don’t seem to know what to make of them. As Lockwood’s editorial notes, some states have ruled them as pari-mutuel wagering the same as the actual live races and gave them the go-ahead. A recent push to get instant racing legalized in Michigan banked on rulings like this, but so far, little has come from it. Other states have labeled them a closer relative of  the slot machine and treated them as such.

Of the three alternative wagering options discussed in this post, instant racing would appear to have the least immediate drawing power. People know what poker is and most can wrap their minds around online wagering. Not much explanation needed. Putting a sign out front that reads “Instant Racing”, however is not quite the slam dunk. Some advertising or other form of public education would probably be needed to get the person on the street both aware and interest in what instant racing has to offer. The risk seemed to work in Arkansas, other racetracks might not be so lucky.

Like slot machines, there is still a sense of trial and error associated with these forms of alternative wagering. In most cases, the results appear promising, but the permanent effects of expanded gaming on the racing industry remain to be seen. When a track can perfect the balance between the races and the alternative wagering without making one of them a sideshow, that operation stands to make a good deal of money.