The Michigan Thoroughbred Owners and Breeders Association will conduct its annual Stallion Season Auction on Monday and Tuesday.

Over 110 stallions from 14 states have seasons donated for the sale.

Bidding began Monday morning and will continue through Tuesday at 6 p.m. Phone bidding will be available Tuesday from 10 a.m. to 6 p.m.

For more information on the MTOBA Stallion Season Auction and to see a full list of the seasons being offered, click here.

END_OF_DOCUMENT_TOKEN_TO_BE_REPLACED

I Do One Two Three wins APHA Running Champion Award

I Do One Two Three competed in stakes races at Remington Park and Mount Pleasant Meadows during his award-winning 2009 campaign.

The Judys Lineage gelding is owned and bred by Walt and Carolyn Bay’s T-Bill Stables. While in Michigan, he was trained by Jay Hall and ridden by Julie Veltman and Oscar Delgado.

I Do One Two Three won two races from seven starts during his two-year-old campaign with earnings of $41,748. In 2009, he entered the gates at Remington Park, Mt. Pleasant and Blue Ribbon Downs.

I Do One Two Three competed in stakes races or trials at all three tracks he visited.

At Mt. Pleasant, I Do One Two Three finished second in the Aug. 30 Great Lakes Quarter Horse Association Michigan Paint Horse Futurity and the July 26 GLQHA Stallion Service Sale Futurity. I Do One Two Three also registered the fastest time in the trials of the latter race. 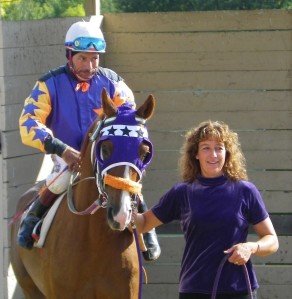 Catch Me Ridin Dirty, jockey Nate Alcala and trainer Nicole Holst were each well-represented in A.R.A.B. of Michigan's year-end awards.

Trainer Nicole Holst wrapped up a successful 2009 campaign by securing an armload of awards for herself and her charges at the Association of Racing Arabian Breeders of Michigan’s year-end awards dinner.

The awards were presented Jan. 9 in Mt. Pleasant.

Holst led all trainers with six awards for horses in her stable, including Horse of the Year Catch Me Ridin Dirty. She also took home two individual awards as Michigan’s champion trainer and breeder.

Catch Me Ridin Dirty earned three awards on the evening, the most of any horse. In addition to Horse of the Year, the Aransas HF gelding also picked up honors for champion three-year-old male and Michigan-Bred of the Year. His dominant meet at Mt. Pleasant also earned Catch Me Ridin Dirty national attention when he was named a finalist for the Darley Award as champion three-year-old male.

To view the preview for the awards, including the full list of nominees in each category, click here.

A full list of winners (with pictures!) can be found behind the jump.

END_OF_DOCUMENT_TOKEN_TO_BE_REPLACED

The Darley Awards are the Arabian equivalent of Thoroughbred racing’s Eclipse Awards. The winners will be announced March 13 in Houston, Texas.

Catch Me Ridin Dirty was Michigan’s top three-year-old male in 2009. He notched five wins from six starts in his juvenile season for earnings of $11,625. His lone defeat was a second-place finish to an older horse.

The Aransas HF gelding was campaigned in 2009 by owner Diana Jackson and trainer/breeder Nicole Holst. Nate Alcala rode Catch Me Ridin Dirty in every start.

Catch Me Ridin Dirty capped off his 2009 campaign with an emphatic 12 1/2 length victory in the Sept. 27 Michigan Juvenile Stakes at Mt. Pleasant. His five wins last year were by a total of 29 1/2 lengths.

Another Darley nominee with experience at Mt. Pleasant is MW Bonnie Z. The K A Czubuthan mare, who is a finalist for champion older mare honors, was a stakes winner at the Michigan track in 2008. She did not make any starts at Mt. Pleasant in 2009.

For more information on the Darley Awards and to see the full list of nominees, click here.

Michigan Office of Racing Commissioner merges with Gaming Control Board

Effective January 17, 2010, the Office of Racing Commissioner (ORC) was transferred to the Michigan Gaming Control Board by Governor’s Executive Order 2009-45. The ORC remains mandated to promote the safety, security, growth and integrity of all horse racing and pari-mutuel wagering on the results of horse races, and simulcasting conducted at licensed race meetings within Michigan.

From this announcement, and the new “Horse Racing” section of the Gaming Board’s website, it appears the ORC will remain largely intact, but under a new umbrella. This is contrary to initial speculation suggesting the Gaming Control Board would regulate the racing industry using its own staff.

It remains to be seen if and how this will affect horsemen and the day-to-day operations at the state’s five racetracks. New developments will be posted if and when they become available.

Apprentice Jockey
Not much knowledge here
Going by wins, earnings, class
Reyes should take this

Horse of the Year
The debate rages
Star filly or monster mare?
Rachel by a nose

The story appeared in Tuesday’s edition of TODAY and I couldn’t be happier with how it turned out. They even picked a pretty sweet picture of me for my bio. Have a look for yourself…

Click here to read the story – “More than just past performances and picking winners”.

Thoroughbred Times TODAY is currently offering a free 30-day trial of its email publication. Having written for TODAY during my internship with TTimes, I can tell you from experience that they do a fantastic job and it is definitely worth your time to check it out.

Filed under Commentary, The Family Business

Buying a stake in new fans

There is no question that horse racing faces the dilemma of attracting new fans.

However, a very big question facing the industry is how to not only attract those fans, but get them to stick around.

To find the answer, we must look at what this sport has to offer that can not be obtained elsewhere. To gain some context, let us examine what other growing niche sports bring to the table…

Poker: The sense of “I could do that”, Opportunity for fame, fortune and recognition on ESPN without possessing any actual athletic ability.

NASCAR: Identification – names, brands, numbers, colors – There are a lot of things for people to latch on to; more so than any other sport.

So what does horse racing offer that these wildly successful pseudo-sports do not?

This question occupied my thoughts for a few days. Then, while listening to my iPod during one of my many snow-shoveling adventures, I found the answer.

During his superb podcast, Ted Grevelis of Owning Racehorses discussed his racing partnerships and how the sport offers the unique aspect of ownership.

“This is something you can’t do anyplace else,” Grevelis said during his Dec. 24 podcast. “You can’t go to a Twins game and walk away an owner, but you can do that in racing.”

This led me to daydream about owning my own racehorse, which was quickly deflated by the cold realization that ventures like that require money – quite a bit of it. I wouldn’t doubt there are many others in my position.

Then, I remembered there are ways around this.

Every year around Triple Crown season, West Point Thoroughbreds holds a contest on ESPN’s website where the winner receives a small share in one of the syndicate’s two-year-olds for a year.

This is a fantastic idea.

To those outside of the industry, horse racing can appear to be an exclusionary game for Middle Eastern royalty, old money and other privileged folks with wads of cash to burn. Giving the average person a little slice of the action through contests like West Point’s is a great way to remove that stigma and introduce new people to the ownership side of the sport.

Holding contests of this nature provides positive exposure for the organization conducting it. The benefits are twofold. First, the stable/syndicate/etc. gains the attention of everyone who registers for the prize they offer. Even if an entrant does not take the big prize, he or she may consider doing business with that group somewhere down the road when the money is available. Second, the contest holder gains the good PR that comes with a new owner’s positive experience. The winner’s local paper will probably write a glowing story featuring the stable. Furthermore the winner would likely tell his or her friends and bring them to the track to see the horse, which could create even more racing fans and potential future investors.

The share doesn’t have to be significant. In West Point’s contest, the winner gets a five percent stake in the horse being offered. It’s not enough to have a say in the horse’s campaign, but it allows the winner to come along for what could be a wild ride and hopefully pick up a few checks along the way. Even if the winner does not become a repeat customer with the stable, he or she will probably be good for some additional handle, which will pay back in purse money.

Not a bad return on investment for what amounts to the hair on a horse’s mane.

If the horse’s manager does not want to risk a long-term garnishing of profits, the terms of the contest could limit the duration of the prize to a year (as is the case with the West Point contest) or a particular meet. From there, the prize winner could have the option of buying his or her share for the rest of the horse’s career, or the share could be kept or re-sold by the horse’s manager. Perhaps the share could be put into a contest for the following year or meet to bring in another new fan.

Contests offering stakes in racing prospects offer positive exposure for the organization holding them and for the industry itself. When thinking of ways to promote the industry to new audiences, this method is worthy of further consideration.

Yeah, we’ve got that.

It’s just a matter of getting it to the fans.

My grandpa, John Murphy, passed away last night at the Masonic Pathways Home in Alma, Michigan. He had been battling a variety of ailments for quite some time.

He’s the one who introduced me to the sport of horse racing, patiently taught me how to decipher the program and instilled a love of the game that lives on to this day. Simply put, if not for him, you’re probably not reading any of the things you see on this site right now.

Outside of the track (though often at the track, too) my grandpa was the funniest individual I have ever known. Readers who have been fortunate enough to meet him over the years have almost certainly been touched by his sense of humor at one time or another. No one could make me laugh the way he could.

Few people have shaped my life like he did.

We lost a good one today.

UPDATE: Funeral arrangements have been finalized and will be as follows…

The funeral will be Friday at 1 p.m. at the Clark Funeral Home with dinner following.

Filed under The Family Business